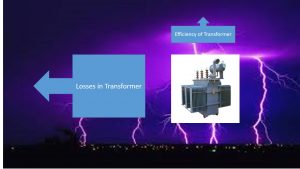 Two types of losses exist in the transformer which is as follows:

The transformer undergoes magnetization and demagnetization due to alternating flux set up in its magnetic core. Due to the hysteresis effect, there is the loss of energy in this process which is called hysteresis loss.

It is given by,

v = volume of the core

The eddy current loss is given by,

t = thickness of the core

Pre-caution to minimize the core losses: The core losses can be minimized by using high-grade silicon steel of having a very low hysteresis loop and the manufacturing process of it in the form of laminations.

Thus for a transformer,

The ratio of output power to the input power is known as the efficiency of any device. So, for the transformer efficiency can be expressed as,

V2*I2 = VA Rating of the transformer

In percentage form, we can write efficiency as follow:

This is the full load efficiency with,

But there is a point to ponder which is what if the transformer is subjected to fractional load. Then the efficiency will subject to the ratio of actual load to full load.

When load changes, the load current changes by the same proportion.

So, due to it the power also reduces by the same fraction. Thus, the fraction of VA rating is also available at the output.

Similarly, copper losses are proportional to the square of the current then,

So Copper losses get reduced by n2.

Therefore, in general, efficiency can be written as

Why slip ring is used in induction motor?

Equivalent circuit of the transformer