The capacitor is a fundamental block of many analog circuits and has the ability to store energy in the form of potential difference. Due to this property of storing energy, they have many applications like signal filtering, spikes removal, and other signal conditioning applications.

A capacitor is made up of two parallel plates placed together very tightly. Plates are made up of conducting material such as tantalum, aluminum or other conducting metal. However, an insulating material is between both the plates, which separate them, and there is no physical contact between both the plates. Figure 1 shows the construction of a capacitor; where two parallel plates have insulating dielectric material between them. 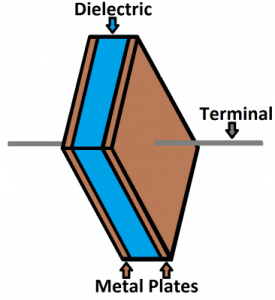 Figure-1: Construction of a Capacitor

The fabrication process of the capacitor can be explained by the following steps:

The two terminals of the capacitors (used to connect a capacitor in any circuit), are attached with the anode and cathode plates by means of soldering or simple crimping.

Both anode and cathode foils are coiled in a fashion that electrolytic paper is placed between both the foils. By coiling both foils in this fashion ensures that there is no conduction path or physical connection between both the foils. The value of capacitance also depends upon the distance between the plates and dielectric material between them. Closer the plates are more is the value of capacitance. Thus, electrode foils are tightly coiled, and electrolyte paper ensures separation between them.

The coiled structure from the last fabrication step also called an “element” is filled-up with the desired electrolyte like a vacuum, liquid, etc.

After filling the element, rubber is attached to it for sealing purposes, and it is placed in the case.

Finally, the Printed sleeve is placed on the case, which displays the rating, capacitance, and polarity of the capacitor.  Heat applied on the sleeve results in its shrinking and a perfect fit on the case.

After fabrication is completed all the units are tested by applying voltage and testing charging, faulty items are removed from non-faulty items based on test results.