A resistor is a simple device capable of opposing the flow of a current in a circuit and can drop the voltage across different components in a circuit. The fabrication process of resistor involves coating a partially conducting material like carbon or some metal oxide film on the surface of the ceramic rod, so when current reaches that coated part it will feel opposition in its flow due to partial conductance of coated material.

Resistors can be divided into many categories depending upon the material used for their construction. However, the two most commonly used materials for resistor fabrication are carbon film and partially conducting metal oxides.

The first step of fabrication is the coating of metal oxide on a ceramic road to be used for the conduction of electric current. This coating process involves a ceramic rod is placed in a hydrocarbon gas chamber at very high pressure and high temperature around 10000C. So elements of carbon deposit at the surface of the ceramic rod to form a layer resulting in a coated ceramic rod. 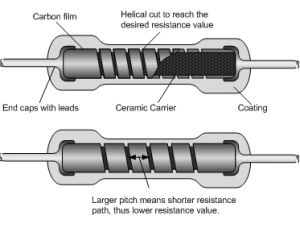 The second step of fabrication is capping. Capping is the process of ensuring that ceramic material is available at both ends of the coated rod. These ceramic ends will be soldered later with leads to form a conduction path.

The third step of the fabrication process is named as spiraling. In this process, an incision (helical cut) is added on the surface of metal oxide or carbon film coating available at the ceramic road. Those incisions patches decide the value of the resistance as indicated in figure 1. If these patches have a larger distance then the value of resistance will be lower, and if patches are close to each other, then resistance value will be higher.

The fourth step is soldering. In this step, the caped ceramic rod ends achieved from the second step of fabrication are soldered with conducting leads to make it able to be placed in circuits using those leads.

The fifth and final step of fabrication is wrapping and applying a coating and colors on the surface of the fabricated resistor with a specific value. In this step, the resistor is coated with insulating material and then different color bands are painted on its surface depending upon its value, to help the user to identify the value of resistance. Tolerance in the value of resistance due to manufacturing material is also presented on the surface of the coated resistor with the help of a specific color band at a specific location. Depending upon the accuracy of the manufacturing process and pureness of material used, tolerance can be ranging from 2% to 20%.